The men rehearsing the dance have the moves down but probably look a little different from dancers in the court of Queen Elizabeth I. Maybe it's the heavy work boots and white T-shirts. Perhaps it's the muscular arms "tatted up," to use the performers' favored expression, daintily extended as the two lines of partners join hands.

Or maybe it's those baggy blue pants, emblazoned with a word that just about guarantees nobody's going to pick up these guys hitchhiking outside on California 1:

The California Men's Colony, nestled in the rolling hills of San Luis Obispo, is nicknamed Camp Snoopy because its slant-roofed wooden dormitories resemble Snoopy's dog house -- but life here is no cartoon. Big, blond, bearded inmate Robert Flory, 41, says, "I've got one guy 2 1/2 feet to my right and another guy 2 1/2 feet to my left" in the prison housing, but he might as well be a million miles away from the 12-year-old son he rarely gets to see. Sometimes he'd like to forget that for a while.

That's why Flory is doing Shakespeare.

Flory, along with about 25 other inmates, is participating in the nonprofit London Shakespeare Workout Prison Project, a program established in 1997 that has produced Shakespeare with casts pairing distinguished professional actors with convicts and ex-convicts -- pros and cons, you might say -- in prisons and theater venues throughout Britain, Europe and North America. Pros who have participated include Al Pacino, Richard Dreyfuss and Kenneth Branagh.

In cooperation with the California Men's Colony's Arts in Corrections program, Flory and his fellow incarcerated performers have spent 12 hours a day for two weeks rehearsing with Kelly Hunter, a long-standing member of the Royal Shakespeare Company, Cornelius Macarthy and Lucinda Clare for "Rounding Shakespeare: In a Kingdom of One's Own," a musical celebration of the works of the Bard that also includes the words of Alfred Tennyson, Abraham Lincoln, Jean Anouilh and Edna St. Vincent Millay, plus sonnets and other writings by inmates and former inmates.

Some inmate actors say they were lured into the program by Deborah Tobola, a resident artist and writer who serves as a facilitator in Arts in Corrections. She offered them a choice: the Bard or "the yard," where participating prisoners say they have to do more acting than they do in the Shakespeare workshop just to survive the racial and social politics of prison life. "We should get Academy Awards," cracks William Brown, 30.

This was Brown's first reaction to the idea of joining the cast of actors and musicians: "I'm from South-Central L.A. -- Shakespeare, get on up outta here, Shakespeare?" he says, laughing. Now, during frequent prison lockdowns, he and other cast members can be found in their bunks, reading their scripts, and Brown plans to continue performing when he leaves the prison. "Even though we're behind these prison walls, in here," he says of the rehearsal room, "we can be free."

The show, directed by Bruce Wall, executive director of LSW Prison Project and a co-founder of the program, opens tonight for a three-night run before an inmate audience. Wall fondly calls his prison performers "the lads." They're fond of him too -- teasing the earnest and oh-so-proper gent wandering among them in a dapper suit and tie.

Visiting actor Clare -- a standout in this crowd because she's female, not to mention her long, carrot-colored hair -- recalls watching as "the lads" rehearsed a scene that required one of them to play a recently murdered corpse, lying on the floor, prompting inmate Flory to make the rather graphic observation: "He'd be twitching by now."

Wall then launched into a rather flustered explanation of why the "body" would indeed be twitching, the murder knife having been rather intrusive, the involuntary reaction of muscles and all that. "How would you know?" demanded Flory, cracking up the onlookers.

For his part, Flory groans, then he chuckles when asked, well, how did he know?

"How do you answer a question like that for a paper that your parents read?" he scolds. "I worked as a bouncer; let's just say I've seen that type of thing before. Or . . . let's say I saw it in a movie once."

In the rehearsal room in the prison's West Facility, which houses the minimum-security inmates, neither cast members nor the director asks questions like that. There's an unspoken rule: Don't ask others what they're in for or when they're getting out. "We deal in futures," Wall says.

It's not a phony respect or false politeness, Flory insists; it's real.

When an inmate actor blows a line, the others chant: "Give me 25!" -- that is, 25 push-ups, a standard punishment for errant behavior in the yard.

But despite the don't-ask, don't-tell policy, the whole cast knows the story of 20-year-old Najee Bright, who is wrapping up the last five months of a 21-month term for assault, reduced from an original sentence of 75 years to life. Through the LSW Prison Project, Bright, a child actor before running afoul of the law, has been offered a full scholarship to study at Oxford University. He says he loves the riddles posed by Shakespeare's words.

"I'm going from a dorm in prison to a dorm at Oxford," Bright says. "All the cards were stacked against me. I hope that gives a lot of other people inspiration. The other guys in the yard can say: 'This young brother got a scholarship to Oxford.'

"Now that I've got a foot in the door, I'm going to be one of the best actors in the world. And when I get up there to accept my Oscar, I can thank prison." Nor will Bright waste his time on the podium thanking his agent and his hairdresser: "I pray for the person I hurt; I'm going to apologize to that person at the Oscars."

Fred Carraway Jr., 43, of central Los Angeles, used to be a member of the Rollin' 60s Crips gang; this isn't the first time he's been in prison, but he insists that, because of his experiences with performance here, it's going to be his last. He may not be headed for the Academy Awards, but he's headed somewhere.

"I'm too old for that," he says of his previous life on the streets. "I smile now that when I go out this time, I feel that I have something to work for."

And if that means dancing the pavane with another guy in the meantime, then so be it. "We learned that in Shakespeare's time, actors were looked down on, like trailer trash, so no woman could go onstage and men played all the parts," he explains.

"You have to be willing to try anything, to get over what the homies might think," he adds. "Hey, if John Travolta's wearing a dress in a movie, we can do this. 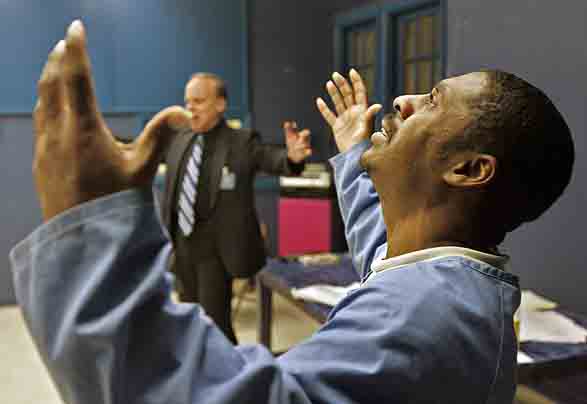 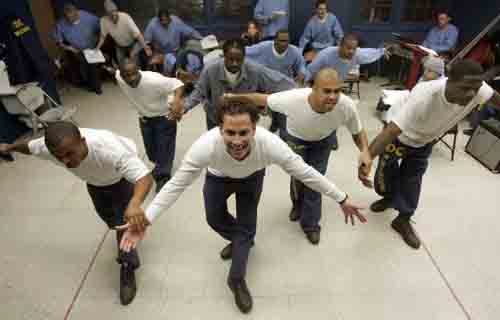 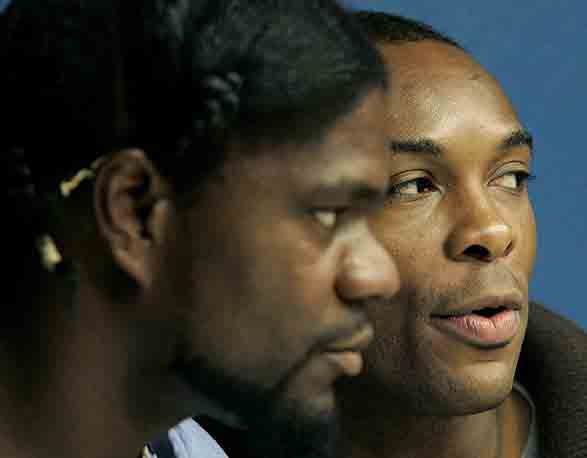