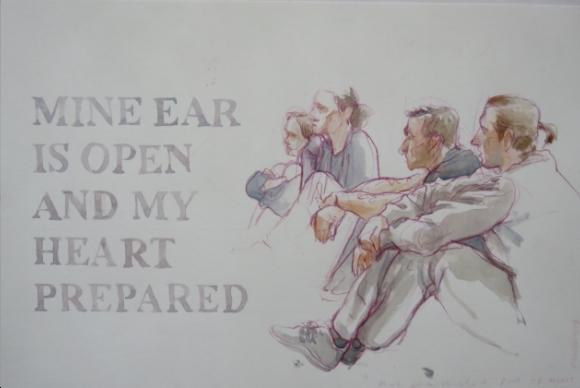 In celebration of its 20th anniversary, London Shakespeare Workout (LSW) launched the LUP (Linked Up Thinking) Initiative offering UK drama students the opportunity to engage with inmates in prison much as it had practiced with RADA for 18 years. On 24th and 26th October 2017 second year BA students of the 2019 Class from the Guildhall School of Music and Drama (GSMD) participated in an LSW Workout with Dr. Bruce Wall (LSW's co-founder aside the resplendent Dame Dorothy Tutin who Daniel McGrath, GSMD Head of Movement, suggested the students might want 'to google') at HMP Pentonville.

These were followed by a group feedback session, a proverbial debrief, in one of the stunningly grandiose GSMD Milton Court studios on 7 November 2017. We were honoured to be able to welcome former Pentonville inmate, Oscar, to this session. Having participated in both Workouts as a Pentonville resident while on hold, Oscar’s feedback complemented the compelling insights offered by students and their instructors, the aforementioned Danny (who chaired) and Brodie Ross.

Students first attested to the sheer buzz they felt participating in the Workout.  One student chimed: “The liberation was felt on both sides, as much for the guys as for us students.” They were amazed inmates expressed a readiness to do anything even if they looked ridiculous. Oscar explained that “you have to be ready for everything in prison.” That said he himself was amazed at witnessing certain hardened facades slipping.

One student realised that she was perhaps more apprehensive about the process than the prison residents were. Inspired by their eager willingness at being creatively discombobulated she cited the inmates as being individuals to look up to; finding that their sense of breakout now informed her own studies at Guildhall.

Various students reported how powerfully Shakespeare’s language was delivered by the internees. As well as Oscar, Bruce lauded Jamil from the first Workout. The GSMD instructor Brodie Ross found that particular prison performer’s work “astounding”. Both performers - Oscar and Jamil - possessed such truth and conviction that one could have mistaken them for professionals. Oscar related that he was so determined to follow this path that he'd called the prison the day after his release asking to 'come back'. 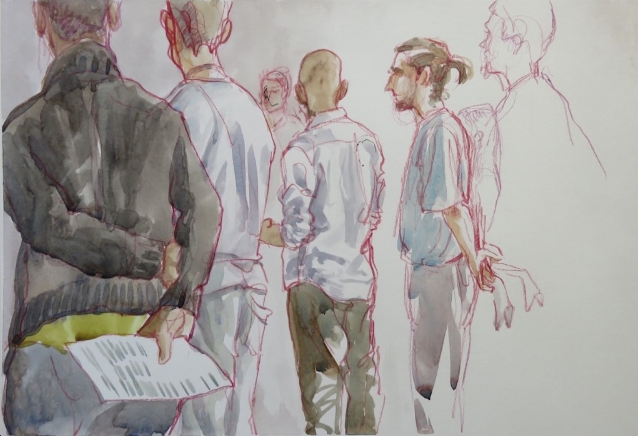 Bruce suggested that Shakespeare’s language is like currency to the inmates.  “It is not just language for them, it is the very coinage of freedom. When all else has been stripped away they can still own it.” The students appeared to appreciate that this celebration encapsulated the very idea of emancipation; of enfranchisement; of suffrage as well.  A simple Shakespearean sentence could here be a tangible pathway to reformation.  During a circle round where single lines were extracted from a plain envelope Bruce exclaimed:  'Every line can be a play unto itself'  One prisoner drew breath and proudly proclaimed:  'The world has come full circle.  I am here'.  He smiled.

In one GSMD session shards of Shakespearean language literally were made to fly.  This was seen as a cathartic invocation.  One student noted how this vision of 'liberation' (that word again) gave him chills. “There is a rhythm to freedom," he noted, "It can set you free.”

“Make not your thought your prisons...thought is free” the groups chanted.  These lines - from two different Shakespearean plays - have been strung together by LSW to forge LUP's moto.  Indeed, in honour of its 20th birthday, LSW has minted LUP as a word unto itself a la the Bard's own practice.  It is (for the record) an active verb.  It signifies 'bringing disparate bodies together in hope.'  We pray it might be proactive.

At various turns in the debrief students drew attention to the special status of the Pentonville room (‘Studio 5’) appropriated for their particular Workout. It is, itself, remarkably spacious within a correctional confine built for an operational capacity of 521 but now housing at least 1,350 adult men and young offenders within its 175 year old and ever fixed walls.

Raw space is clearly at a premium.  Other forms of rawness otherwise dominate.  Even if only momentarily this arena outside the prison Mosque became a neutral meeting ground for creative interchange; a place of shared understanding; one where collaboration between inside and out could flourish.  No wonder so many of the prisoners said they 'forgot they were in prison'.   Several students were amazed they too felt the same. 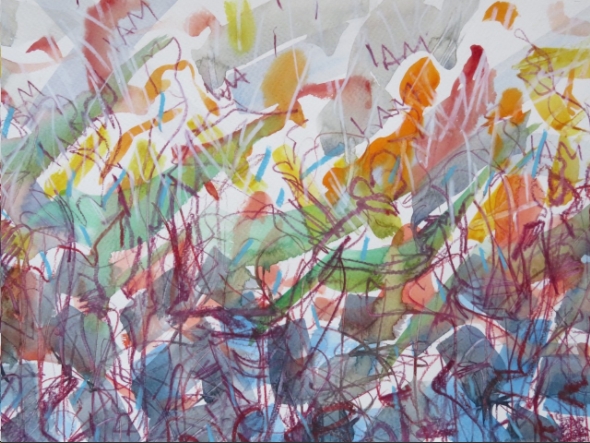 One student conceded how, previous to the Workout, he sometimes felt acting existed for him only within the confines of Guildhall.  He'd experienced difficulty in sharing/discussing such with friends/family or, indeed, the prisoners. After the Workout he found he was better able to acknowledge for himself just how stifling an idea that was; how we limit ourselves by separating what we understand from others rather than emphatically sharing perceptions. He marvelled at how everyone was liberated as one within the space: “Everyone lost themselves but found themselves at the same time.”

No longer were we inmates and students. We were artists within a shared common denominator. Bruce contends this is part of the beauty of Shakespeare; the consistent celebration of ‘community’. Having begun the session as strangers the inmates left high-fiving each other and hugging the students. During these two and a half hours we transcended all backgrounds; creeds; genders and races.  We were free to be as one. 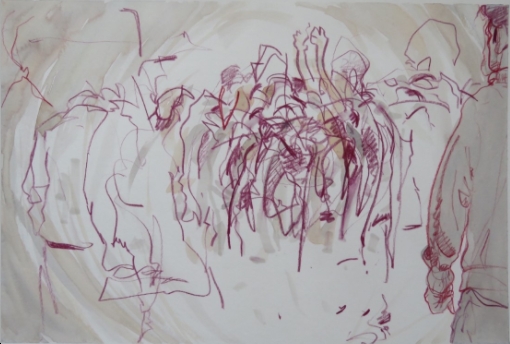 Repeatedly students expressed how the Workout had prompted them to re-evaluate their role as actors in the world today. Parallels were drawn between Pentonville and Guildhall as institutions, with Bruce wryly reminding the students that, “Much like a prison, you are all institutionalised, incarcerated in this glorious facade.”

The GSMD students unanimously agreed that the Workout had been a healthy experience because it encouraged them to look beyond their corporate confines and seek opportunities to apply their talents outside. One student reported the experience had made him want to go further with his craft, “I don’t want to settle for doing work and not having something else involved.”

Comparisons were drawn between performance as a service versus (to cite Brodie’s colourful interjection) a “wank.” As one student affirmed, “It is so incredibly easy to disappear up one’s own asshole in college. We’ve all experienced being empowered doing theatre, and sometimes it’s easy to forget that. To go into Pentonville and work with the gents, and see how poignant and what a difference that makes, it revitalises you and your love for the art.” 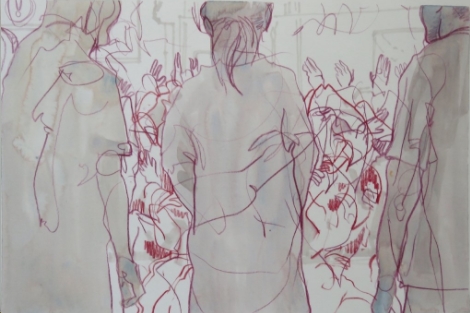 This prison experience appeared to encourage students to consider how their individual goals might be redirected to simultaneously accommodate social ones. The privilege of this work itself can feed the soul.

As the session concluded, the students asked Bruce how they could support the project going forward. Fundraising was posed, but Bruce asserted there must be no financial implication with LSW, “Money is useful, but only to a certain point. The most precious resource is people; you and your ability to listen and respond. As actors we forget that at our peril.”

Bruce asked the students to embrace and nourish their Workout experience at HMP Pentonville because change starts with people outside: “These institutions need you. You are - or certainly will be - the vehicle of their change: This space, that in your mind and the fulcrum of your voice, has the capacity to forge change for good in this country, indeed everywhere, and that is something we must champion.  It defines us.”

Danny expanded on the vital role actors have to play as communicators for humanity: “Actors have a job to make other people feel something, to experience something. It is important we never forget the journey that we’re all on: How do we ourselves experience, and how do we let others experience that same. How do ‘I’ use the experience of my training to release someone else, for a minute, for a second...” 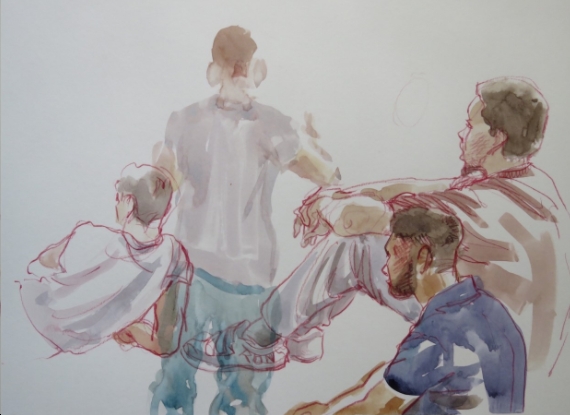 In his closing remarks, Danny mused on the process of ‘becoming’, a process that resonates powerfully with anyone who’s ever had a dream whether they are drama students, prisoners or anyone engaged in a developmental pursuit. Looking forwards Danny offered a vision of the future brimming with possibility: “Guildhall is transitory much as it’s transitory being in prison.” Danny reinforced the value of LSW’s own creative promise: 'To promote confidence through the will to dream for all'.

Oscar related the story of his own recent arrival at HMP Pentonville. As the van (a so-called ‘Black Maria’) trundled into the prison complex’s front gate, he was confronted through the slit of his cage with a sign proclaiming, “Providing Hope and Delivering Opportunity”. “Bullshit,” he derided, "The workshops did that for me."

The UK prison system is in crisis and has historically failed to deliver on rehabilitation. As Bruce argues: “If prisons really worked there would be fewer of them.” The power of Shakespeare's language can take prisoners (wherever they may be incarcerated) away from/out of themselves. As one Pentonville inmate mused: “If you have the nous to shoplift; you have the nous to do this. Acting is just legal manipulation.”

Growth is a creative journey we can all share in.