This is an email written in response to an
LSW/LUP Workout at HMP Pentonville
on Friday, 15 November 2019 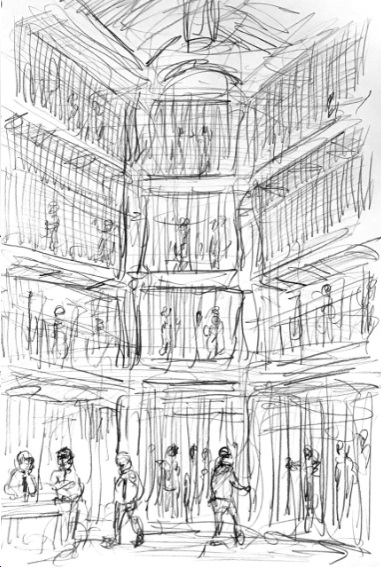 Thank you so much for yesterday; I found it a profoundly moving experience and would be happy to send feedback in any format that is helpful. I felt so honoured to be a part of it, and I'd love to do it again. 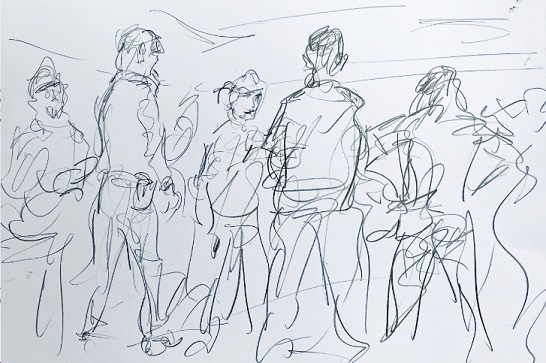 Seeing the inside of the prison was, to put it mildly, an eye-opener. The fact that, as you pointed out, it was built for a third of its current population and in all that time the building itself has not grown. Seeing the three bunks in one room, and imagining what this week where the prisoners have been on lock-down, unable to leave their cell for even the minimal amount of time they can normally count on, the thought of it is horrendous. One of the most striking things was the change in my feelings from the start of the workout to the end. Indeed, as we were conducted through the prison by Jose, even though I knew we were completely safe, I found myself scared on our way to our session room. 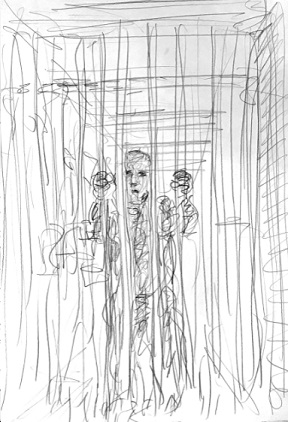 The place itself generates a kind of fear, but I was struck by, as a visitor, feeling alien in that environment. What I realised was that this was the tiniest taste of something unpleasant the prisoners are going to feel, perhaps for the rest of their lives, once they get out. That place, that system, the brutality and difficulty of it must leave a deep impression on anyone - that sense that, once you've been there, you are now a 'freak' in some way in any other environment, just as we were as visitors. 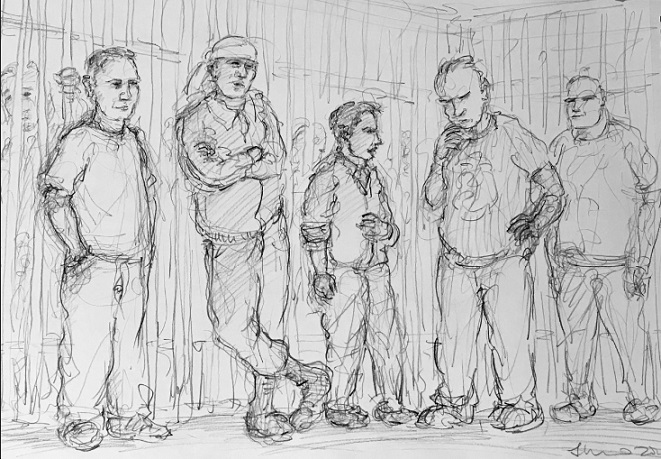 This transformed almost instantly as we met the guys in the room, and I give you so much credit here for ensuring that we, as actors, did not know any more about what was going to happen than the prisoners did. We were not privy to some inside knowledge that changed our status - information was unfolding for us at the exact same time as the prisoners. This is a brilliant part of the way you work. 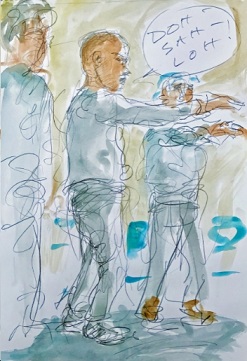 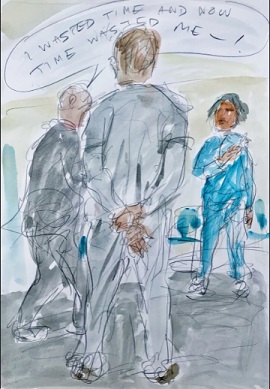 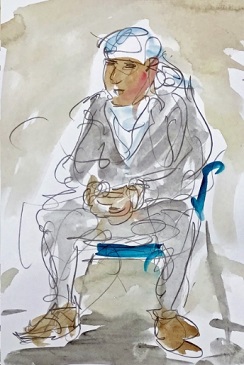 One of the greatest joys of acting is forming a company from disparate people, and how you become bonded quickly by engaging in a play, or by playing silly games, making fools of yourselves, listening to and engaging with each other and re-acting. So, by the end of the short session, where we had initially been hesitant and nervous, we had become a company of actors - it didn't matter who was who anymore. 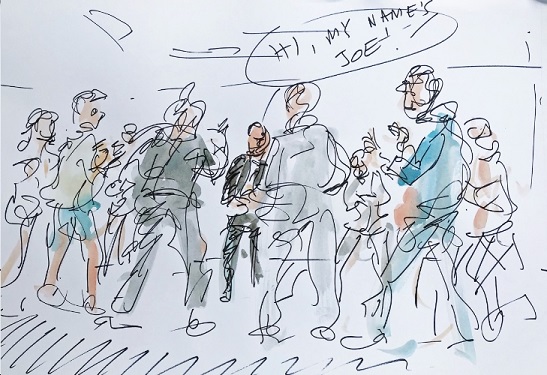 This is more than a pleasure, it's an essential part of being human, and when all kinds of systems, not just the criminal justice system, can compromise our shared humanity on a daily basis, this is such a precious thing. 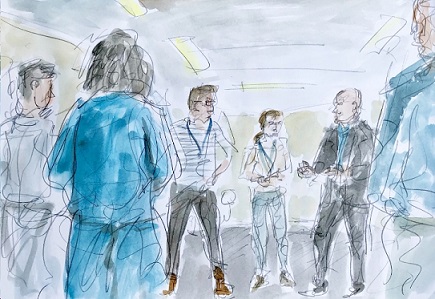 Hearing the stories some of the lads told about their week was astonishing - how Jordan had spent two months getting his cell exactly how he wanted it and it had just been turned upside down by a guard, how much pride he took in his work on the magazine, how Callum was relieved he'd be home for Christmas.

Throughout November, a number of charities and mental health organisations have focused on 'Men's Mental Health'. This is an important subject to me, and it informs a lot of my work as a writer and an actor, through people I've known and from my own experiences of struggling. 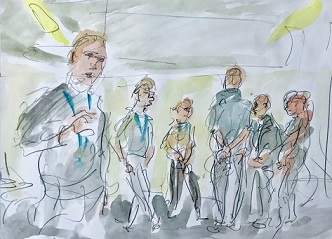 One of the best actors I ever worked with was a friend at university who killed himself a few years ago. We had lost touch over the years, and I will never know what went through his brain that made him decide that life could not get better, but I know the world is worse off without him in it. The experience of acting with him at university was one of the reasons I decided that this was the job I wanted to work in, so I will always be grateful to him for the eight or so weeks we spent working together. 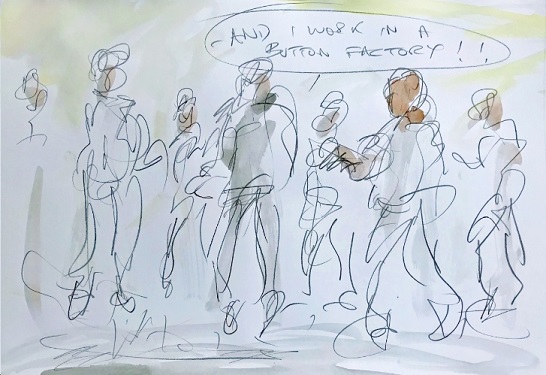 In life and on stage I'm sometimes struck by how difficult it is for men to access and express emotions other than anger - it feels safe because it feels powerful, but it takes away the ability to listen. This also makes 'anger' usually a very dull acting choice, particularly for men. I was struck by how comfortable the men in the workshop were showing their emotions, their sense of humour but also their vulnerability. Almost the first thing Callum said when he described the week of lock-down was 'It's been a real test for my mental health'. To a room full of strangers! The generosity, the willingness to share that, and then to stand in a circle and make a weird sound and a gesture, or to pretend to be a lion, or a seal, or to call out a line of Lear, or Helena, or Hamlet, or Coriolanus, is the most precious gift an actor can give in a rehearsal room. 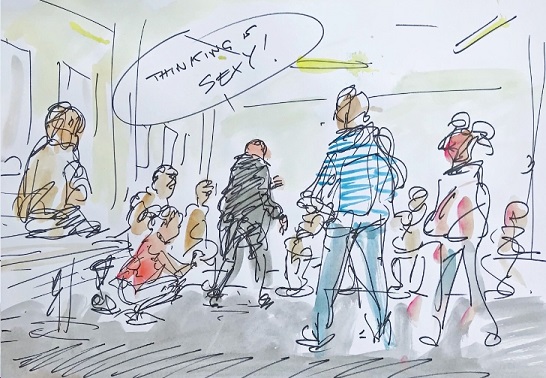 These guys, all of them, were actors in that workshop, with every bit as much right to be there and to occupy that space and say those words as any of us. You know all this of course, but I was so impressed with the practicality of how you framed what we were doing - that these are skills each of us have a right to access in parole interviews, auditions, personal relationships, job interviews, and in our own thoughts. We can become something other than what we are now. 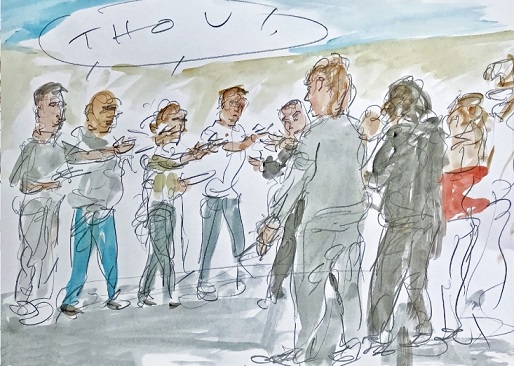 These are just a few random thoughts I wanted to share with you, I'd love to send some more composed feedback when I've had a bit more time to sit with it. But I wanted to thank you while it all still felt quite fresh. It was a total joy to be a part of. 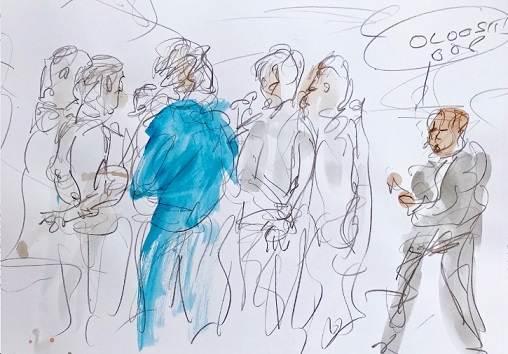 (Perhaps I should explain that the above caption - a combination of Portuguese and Swedish - translates as 'Eyes Up'.
Don't worry.  It made sense at the time.

It should also perhaps be pointed out that the extraordinary impressions above - i.e., both those of a narrative and a practical arts
frame work - were engendered within a session which lasted - in totality - but a few minutes over one hour.

Time can, it's true, be cruel ... but as is so prominently evidenced here ... brevity clearly found its soul of wit.
That - as with Shakespeare - is a privilege we can ALL profit from.

With my sincere thanks to both Joe and Lawrence ... RBSW)